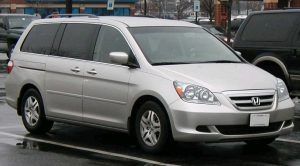 For this month’s Make/Model Spotlight, we’ll take a look at a popular mode of transportation for all the Soccer Moms and Dads out there. We’re talking about the Honda Odyssey minivan; a vehicle that’s been hauling children’s sports teams around since 1994.

Manufactured by Honda, a Japanese automaker, the Odyssey is a minivan currently enjoying its fifth generation. The original minivan manufactured for Japan was much smaller than the current one we see in the North American market, simply because it wasn’t well received by the U.S. at the time. For the most part, this same concept has stayed the same over the years. The U.S. market primarily manufactures and sells the larger version while in Japan and abroad, the smaller version remains popular.

The first generation of the Odyssey was made available to the U.S. in 1995 and lasted through 1998. It was Honda’s first minivan and was built largely on the popular Accord platform. Two trim levels were available, the seven passenger LX and the six passenger EX. In 1996, New York City’s Taxi and Limousine Commission approved the use of the Odyssey for the taxi fleet.

The second generation would last from 1999 to 2004. This generation was much larger than the first generation and incorporated the Chrysler minivan style, with sliding rear doors as opposed to hinged ones. The two sliding doors were standard issues unlike many minivans that offered only one sliding door as the standard.

For the third generation, the Odyssey grew in width and weight. The vehicle started incorporating more elements of comfort such as sunshades for the rear doors, windows that rolled down in the second row, and an in-floor lazy susan storage compartment.

The fourth generation started in 2011 and would last until 2017. The body became more wide and sleek and the roofline was lowered. The 2014 mid-generational refresh brought the availability of an aluminum hood, aluminum front fenders, Smart entry, and even a built-in vacuum cleaning system for the Touring Elite models. The fifth and current generation is being offered for 2018.